Snapshots of the first experiments run on our new image cytometer

In this example phagosomes and lysosomes where stained in different colors. If both are colocalized in the cell, the phagosomes are considered as mature. Of course, the phagosomes could also be detected by fluorescence labeling of the bacteria prior the incubation with cells. 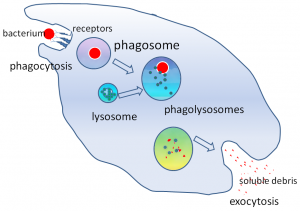 The power of this method, if conducted on the image stream, is that you can quantify the amount of mature and premature phagosomes and analyze them in different cell types (like neutrophils and macrophages) at the same time, without prior separation. You simply have to stain for the cell type specific surface makers to identify the different populations.

Prime Flow RNA Assays are fluorescence in situ hybridization (FISH) assays that allow specific localization of RNA targets in flow. RNA detection can be combined with intracellular or surface stainings of proteins on a single cell level. PrimeFlow RNA Assay

These assays can also be measured in conventional flow cytometry, but in image cytometry you will get a better resolution, because the RNA signals are focused in discrete spots with rather low intensities. This kind of signals are hard to analyze in conventional cytometry because you only measure the overall fluorescence intensity of each cell, which might be just slightly above the background. To solve this problem, you can use image cytometry and then you are able to combine the fluorescence intensity and the localization of the signal.

In Victorias  project, she is interested in bacterial clearance in neutrophils. First experiments could already show, that the method is promising. The cells where stained with anti CD45 and anti Ly6G for identification and the bacteria express mCherry. 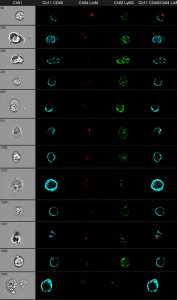 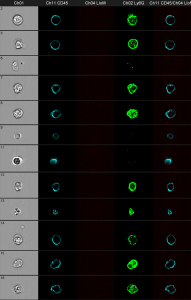 You can clearly distinguish between discrete red dots at the left figure compared to the wild-type control at the right. The next challenge is the optimization of the spot-counting algorithm to get precise results of the automated analysis.

Michael wants to investigate mitochondrial differences in NK-cells between HIV patients and healthy donors. The samples were stained with surface markers like CD56 in order to gate on NK-cells and CD3 to exclude the NKT-cells. The mitochondria were stained with Mitotracker green. The amount of mitochondria per cell can be analyzed by spot count algorithms in high throughput on single cell level. This is more precise than standard flow cytometry, way faster and also less error-prone than microscopy.  But as mentioned before, the automated analysis still needs some improvements.

In this experiment, Katarzyna tried to analyze the speck formation of the protein ASC during NLP3 inflamasome activation in M-CSF generated human macrophages. In a non activated state the protein is equally distributed within the whole cytoplasm of the cells. After inflamasome activation the ASC protein clusters in discrete regions of the cell and can be used as a reporter.

Adult cardiomyocytes (CMs) of mammals have very often two nuclei. This makes cell cycle analysis and proliferation studies very difficult. The group of  Dr. Michael Hesse has established a transgenic mouse model to visualize the CM nuclei in vitro and in vivo, by fusing the red fluorescent protein mCherry to human histone 2B (H2B) and expressing it in CMs by use of the αMHC (Myh6) promoter. Cora Becker used this reporter system now on the ImageStream system to benefit from its high throughput capabilities and the automated data analysis. Compared to conventional microscopy, this method is much faster and  in combination with the autosampler it can even be used for screenings.