Third Edition of the “Guidelines for the use of flow cytometry and cell sorting in immunological studies” published!

We are happy to announce, that our move to the new laboratory in the BMZII was successful. Access to the building for external users is still a little bit tricky, though. Our facility is...

End of the year Announcements

Dear Users, since 2020 is coming to an end we´ld like to thank you for your trust and understanding during those special times. We hope that our restrictions didn´t hinder your measurements too much,...

Dear users of the Flow Cytometry Core Facility, first of all, we wanted to thank all our users for accepting and respecting the rules and regulations established to deal with the corona pandemic as...

Dear all, we need to implement further restrictions to the use of the FCCF facility. We apologise for this constant upgrades, but the situation is constantly developing. The aim to is make sure as...

Apple’s latest macOS (version 10.15 Catalina) was released this week. There are two issues relating to FlowJo we are aware of: On Catalina, dongles are not authenticating FlowJo v10 when launched from the... 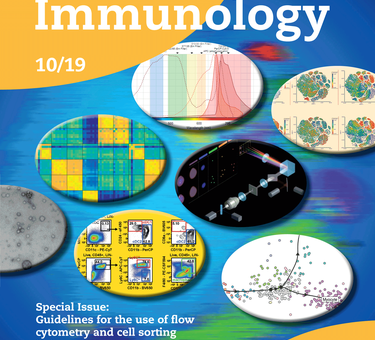 Updated Version of the Flow Guidelines, published in the European Journal of Immunology, is now online!

As most of our users might already know,  Natalio, Peter and I (Andreas) are three of over 300 coauthors of the “Guidelines for the use of flow cytometry and cell sorting in immunological studies”...

At this years 34th congress of the international society for advancement of cytometry (Cyto) in Vancouver we proudly presented our work „Visualizing Data Spreading after Compensation as a Decision-making Tool for Multicolor Panel Design...

Snapshots of the first experiments run on our new image cytometer

Phagosome maturation after bacterial uptake: Dr. Katarzyna Jobin,Scientist (Kurts Lab, Institute of experimental Immunology): In this example phagosomes and lysosomes where stained in different colors. If both are colocalized in the cell, the phagosomes...

A comprehensive overview over all new devices of the Flow Cytometry Core Facility.