To break down toxic proteins more quickly, immune cells in the brain can join together to form networks when needed. This is shown by a joint study of the University of Bonn, the German Center for Neurodegenerative Diseases (DZNE) and the Institut François Jacob in France. However, in certain mutations that can cause Parkinson’s disease, this cooperation is impaired. The findings are published in the renowned journal Cell.

The protein alpha-synuclein (abbreviated aSyn) performs important tasks in the nerve cells of the brain. But under certain circumstances, aSyn molecules can clump together and form insoluble aggregates. These damage the neurons; they are for instance typically found in the brains of people suffering from Parkinson’s disease or Lewy body dementia.

The immune cells of the brain, the microglial cells, therefore try to break down and dispose of the aSyn aggregates. This process is not only time-consuming; it can also cause the microglial cells themselves to perish. “We have now identified a mechanism that addresses both problems,” explains Prof. Dr. Michael Heneka. The researcher is director of the Department of Neurodegenerative Diseases and Geriatric Psychiatry at the University Hospital Bonn and conducts research there and at the DNZE on neurodegenerative diseases such as Parkinson’s and Alzheimer’s disease.

The research suggests that microglial cells may spontaneously join together in order to better cope with threats. For this purpose, they form tube-like projections that dock onto neighboring microglial cells. These connections are then used to distribute the aSyn aggregates among the partners in the network. Without this division of labor, individual immune cells would have to shoulder a major part of the degradation work and would be overwhelmed. […]

Participating Core Facilities: The authors acknowledge the support from the Flow Cytometry, Next Generation Sequencing, and Microscopy Core Facilities.

Participating institutions and funding:
In addition to the University of Bonn and the DZNE, the Institut François Jacob (France) and the University of Massachusetts (USA) were involved in the study. The work was supported by the German Research Foundation (DFG/Cluster of Excellence Immunosensation), the EU Joint Program on Neurodegenerative Diseases (JPND), the EU Horizon 2020 Research and Innovation Program, the European Federation of Pharmaceutical Industries and Associations (EFPIA), the non-profit Hertie Foundation in Germany, and Parkinson UK.

Study in Science: Combination of two molecules simultaneously attacks multiple sites on the surface of the virus An international research team led by the University of Bonn has identified and further developed novel antibody fragments against the SARS coronavirus-2. These “nanobodies” are much smaller than the classic antibodies used to treat US President Donald Trump,… 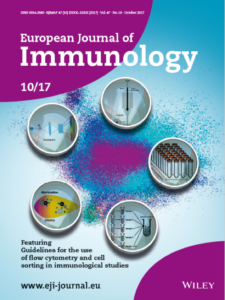 In 2018 the Flow Cytometry Core Facility was able to acquire five new instruments. A FACSAria Fusion cell sorter, a second LSRFortessa cell analyzer and an ImageStream  image cytometer were granted by the DFG through a large device application. (“Forschungsgroßgeräte” nach Art.91b GG) Special thanks goes to the excellence cluster “ImmunoSensation”and to the SFB TR57 .  A…

Study by the University of Bonn shows that mutations of the investigated gene manifest in different patterns of inheritance The so-called Plexin-A1 gene seems to play a more extensive role in brain development than previously assumed. This is shown by a current study led by the University Hospital Bonn and the Institute of Anatomy of…

The primary cilium constitutes an organelle that orchestrates signal transduction independently from the cell body. Dysregulation of this intricate molecular architecture leads to severe human diseases, commonly referred to as ciliopathies. However, the molecular underpinnings how ciliary signaling orchestrates…