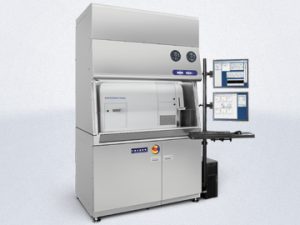 You are not familiar with all these strange-sounding devices? Here is a brief description of each:

The BD FACSAria Fusion is a multicolor high-speed cell sorter in a fully integrated biosafety cabinet. It is located in a S2 cell culture laboratory within the Institute of Experimental Immunology. This, now gives researchers the opportunity to sort their biosafety level S2 organisms. Both, sterility of the cells and protection of the user and operator is guaranteed by the biosafety cabinet in combination with an aerosol management system. In contrast to the already existing FACSAria III, the Fusion is equipped with five Lasers (355nm, 405nm, 488nm, 561nm, 635nm) and 20 detectors. It matches the exact configuration of the LSRFortessas in our facility, including a real UV excitation light source for the excitation of the brilliant UV dyes. Thus, experiments can be easily transferred from the analyzers to the cell sorter. We have three different nozzle sizes, (70µm, 85µm, 100µm) to choose the optimal drop volume for the most common cell types. We can sort up to four populations at the same time and also into the usual micro titer plates (6, 12, 24, 48, 96 and 384 wells)

The second BD LSRFortessa was procured to support the already existing device, which was heavily overbooked. The two Fortessas have exactly the same configuration and experiments can be performed on each of them without any adaptations. 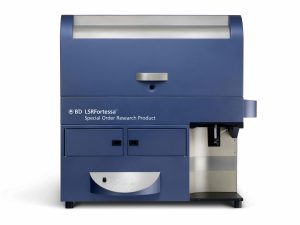 Both of them are equipped with five Lasers (355nm, 405nm, 488nm, 561nm, 635nm) and 20 detectors. Since 2017 we also have an automated plate reader (HTS) which can be connected to the instrument in order to improve experimental workflow and to safe time. It provides fully automated sample acquisition from microtiter plates. (Ask for a brief training if you want to use it for your experiments). The configurations of both machines are optimized for the use of BUV- dyes and match the configuration of the new Aria Fusion cell sorter as well.

The BD FACSMelody cell sorter is a small and easy to use cell sorter, equipped with three lasers (405nm, 488nm, 561nm) and capable of detecting 11 parameters. This instrument is intended to be used without the assistance of a specialized operator. With the newly designed BD FACSChorus™ software, researchers are guided throughout the entire cell sorting process using advanced automation technology. It is designed to eliminate manual steps and it has a really simplified workflow. 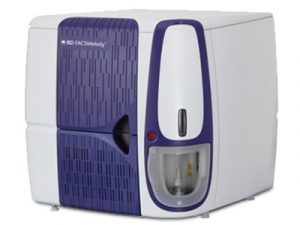 Especially sorting of cell lines which express fluorescent proteins can now be easily performed by the researchers themselves after a training by the FCCF staff. Sorting can be done either as single cells or as bulk into tubes or various plates. It is limited to two-way sorting and there is only a 100µm Nozzle available, so sorting of immune cells will be up to four times slower than with our other cell sorters.

The new cell sorter is located in an S2 laboratory, housed in a biosafety cabinet and equipped with an aerosol management system.

The Attune NXT acoustic focusing cytometer is a conventional flow cytometer with an acoustic assisted hydrodynamic focusing technology. This technology leads to a higher signal accuracy at high throughput. This is especially an advantage if you have a huge number of cells like in whole blood applications. The instrument has four excitation lasers (405nm, 488nm, 561nm, 640nm) and 16 detectors so it is ready for modern multicolor phenotyping. Furthermore, it is equipped with an autosampler for fully automated sample acquisition, an optimized filter set for no wash, no lyse protocols and an additional SCC detection filter for the violet laser which is beneficial for small particle detection.

Those specifications match the requirements for clinical applications optimally, so this instrument is mainly reserved for clinical samples. The work with clinical samples is sometimes different compared to the work with model organisms. For some studies it is hard to predict when patient samples will be available, and in other studies the samples accrue always at the same time point and have to be analyzed within a certain time. If you have samples like this, don’t hesitate to discuss your needs with us.

The ImageStream®X MarkII is a cytometer which combines the best out of two worlds:

Imaging flow cytometers combine the speed and sample size of flow cytometry with the resolution and sensitivity of microscopy in a single instrument platform unlike any other available for cell analysis. With up to 12 channels for each cell in a population, microscopic images provide qualitative and quantitative image data of every event acquired in flow.

Our Instrument is fully equipped with 7 lasers: 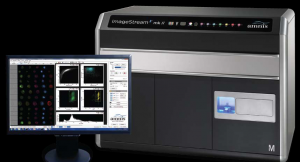 A high power 488nm laser for enhanced detection of fluorescent dyes excited at that wavelength and six additional lasers, including 375, 405, 561, 592, and 642 nm for maximal experimental flexibility. The 12 Image Channel option significantly expands the experimental flexibility and analytical potential of the ImageStream®X Mark II Imaging Flow Cytometer by doubling the number of images per cell from six to twelve. This option is comprised of a second image detection system, including a filter wheel, inline filters, spectral decomposition assembly, and proprietary CCD camera. The MultiMag option provides 20X and 60X objective lenses in addition to the standard 40X objective for greater experimental flexibility and improved resolution. The extended depth of field (EDF™) option is a unique optical system upgrade for the ImageStream®X MarkII cytometer. It keeps the depth of cell in focus without loss of fluorescence sensitivity. Now you can image FISH spots or other sub-cellular features no matter where they lie in the cell. Of course, the analysis of imaging data can be very challenging. To support scientists in this task, we have a campus license of the IDEAS® Software. It offers powerful, familiar tools for creating histograms and scatter plots. Click on any dot in a scatter plot to see the corresponding cell’s image. Numerical scoring of parameters such as size, shape, texture, colocalization and intensity allow quantification of visual data. If necessary, the core facility staff will support you with the analysis of your generated data.

Here are some examples from the first experiments from the users of the Flow Cytometry Core Facility: 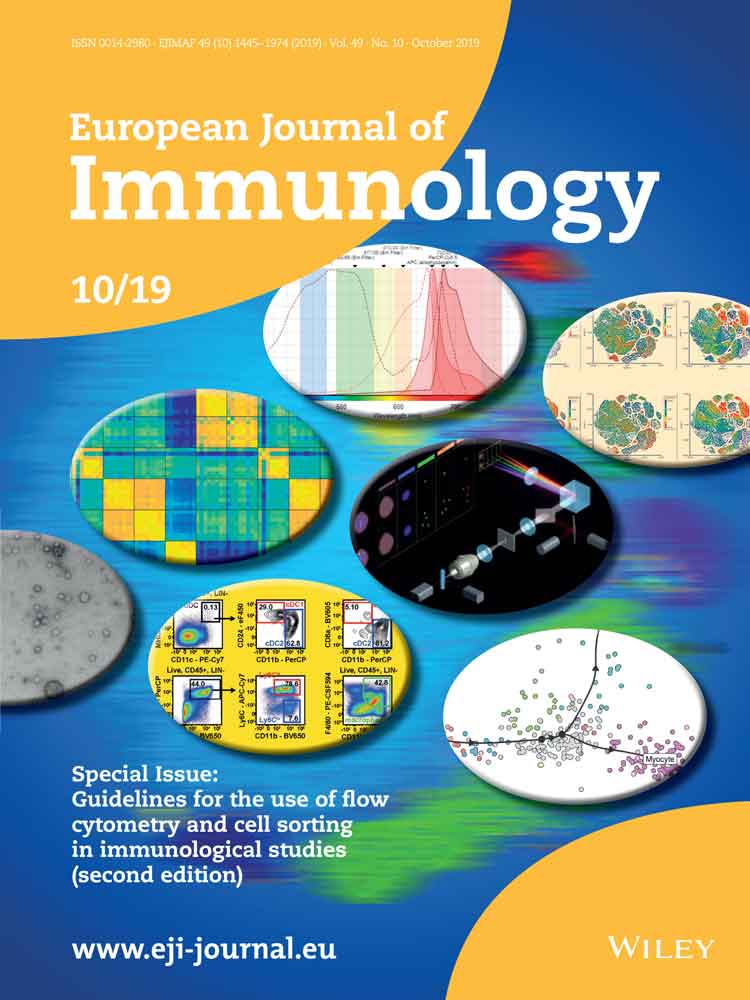 The European Journal of Immunology has published the second edition of the very comprehensive guide to flow cytometry  and cell sorting in immunological studies. And we contributed to that edition. Here is the information from the abstract: “These guidelines are a consensus work of a considerable number of members of the immunology and flow cytometry… 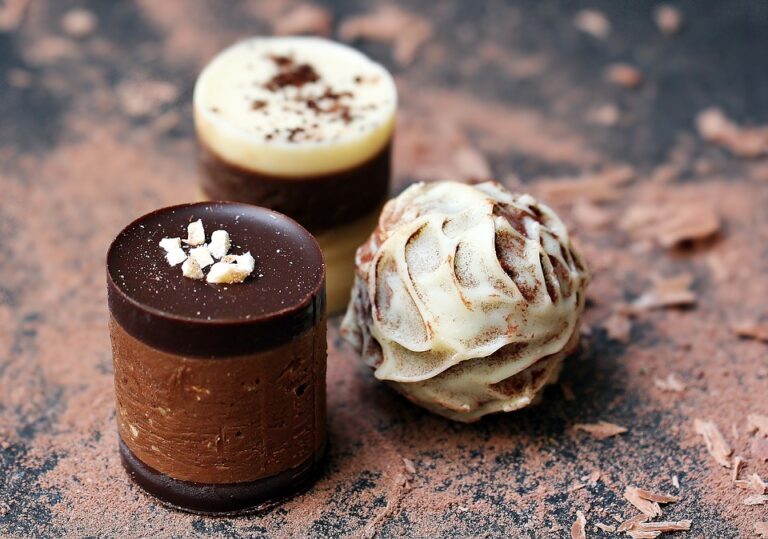 Originally posted by Rachel Walker on BitesizeBio The helpful people who work in your flow core are an amazing resource of information for your experiments and are the people with the power to get experiments done. However, you need to be nice to these powerful people, so here are a few handy hints: Its all…

This cooperation is impaired in mutations that can cause Parkinson’s disease To break down toxic proteins more quickly, immune cells in the brain can join together to form networks when needed. This is shown by a joint study of the University of Bonn, the German Center for Neurodegenerative Diseases (DZNE) and the Institut François Jacob…

The Journal of Biological Chemistry, 291, 103-109. The mechanisms of NLRP3 activation are still poorly understood. Jonathan Schmid-Burgk and colleagues present new data on the identification of NEK7, which specifically functions upstream of NLRP3 activation. NEK7 was identified in an unbiased genetic screening approach, which employed the CRISPR technology to identify macrophages that were rendered…

This would be the perfect time to ask something like ” how old is this flow cytometry stuff”. This month sees the 50 years anniversary of the first publication on cell sorting by Mack Fulwyler (Science 1965) and a first description of a Spectrophotometer for ultrarapid cell analysis by Louis Kamentsky and Myron Melamed (Science…